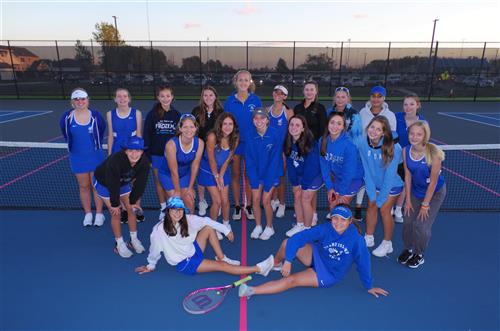 Grand Island took a major step toward sole ownership of the Niagara Frontier League girls tennis championship with wins this week against the second-place and third-place teams in the standings.

GI beat third-place Lewiston-Porter Sept. 27 and added a win Sept. 29 against second-place Niagara-Wheatfield to improve to 11-0 in the league. N-W has two losses, both to the Vikings, and L-P has three. GI has three matches remaining on its league schedule.

The Vikings won close matches to seal the win against the Falcons, who could have tied GI for first in the NFL with a victory. Riley Weber trailed N-W's Arianna Mohilewsky 5-2 in the third and deciding set but came back to win 7-5. GI's first doubles team of Alicia Hunt and Mia Schiffmacher battled N-W's Gabriela Stanley and Hannah Stewart into a third set tiebreaker, where they prevailed 7-5 to win the set 7-6.