The three GICSD Distinguished Alumni honorees include the music director of New York City’s The Dessoff Choirs known for their performances of great choral works from the pre-Baroque era through the 21st century, a twice Emmy nominated and international award winning film composer and music producer and one of the only scientists to serve as the lead federal representative of a university in the United States.

They will be recognized in a ceremony Friday, March 29 at the high school and will speak to students about their career paths. 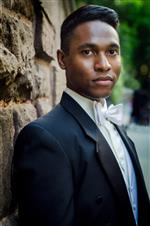 Class of 2003: Malcolm J. Merriweather, a conductor and baritone, has enjoyed a varied career from singing Bach’s St. Matthew Passion to conducting the music from Legend of Zelda. He is music director of New York City’s The Dessoff Choirs, known for their performances of great choral works from the pre-Baroque era through the 21st century. He is an assistant professor, director of choral studies and voice department coordinator at Brooklyn College of the City University of New York, artist in residence at Union Theological Seminary. He is also artistic director and founder of “Voices of Haiti,” a 60-member children’s choir in Port-au-Prince, Haiti, he operated by the Andrea Bocelli Foundation. Voices of Haiti held its first rehearsal in 2015 and through music strives to promote discipline, collaboration, and dignity amidst misery brought on by the grip of poverty.

Merriweather has led performances at Carnegie Hall, Lincoln Center, Tanglewood Music Center, Madison Square Garden, and for Pope Francis at the Vatican, among others. He has collaborated with the Boston Symphony Orchestra, Columbus Symphony Orchestra, Trinity, Wall Street, Cathedral of St. John the Divine, New York Choral Society and many others. He has also worked closely with Andrea Bocelli and Placido Domingo.

Class of 1982: Wayne Sharpe is an award-winning television and film composer whose ability to craft powerful evocative soundtracks and themes has allowed him to establish himself as a dynamic and creative force in the film and television industry. A highly specialized composer and a unique producer fusing orchestral scoring with electronic music, Wayne composed the new music theme for IMAX theaters playing daily in over 1,000 theaters worldwide by using the backdrop of the beautiful and haunting Prague orchestra.

Handpicked by Man Made Music founder Joel Beckerman to create a fresh sound for CBS Evening News, Wayne’s theme is a complete makeover from the previous version by Oscar-winning composer James Horner and is playing in households across the country, every evening, nationwide. This well-received and epic theme led him to score the Olympics, The CBS Evening News, The CBS Election Theme, Face The Nation, The NYC Marathon, Miss Universe, And Miss USA to name a few.

A branding specialist and a master at creating some of most unforgettable themes in television today has led Wayne to scoring for television royalty.  Clients, both domestic and abroad, are vast and varied from ITV, Discovery, The History Channels, Showtime, NBC, CBS, NBC Sports, NBA, BRAVO, IMG, HBO, Warner Bros., and MSG Sports.

Entering into the new wave of interactive music, Wayne was tapped by international client Philip Morris to score a dramatic light show for the global launch of their new alternative innovation IQOS. Versatile and imaginative, he’s the go to composer for his commercial clients in need of dynamic and relevant music and he has scored over 200 national TV spots for partners like Intel, Maybelline, L’Oreal, Cover Girl, NBA, Acuvue, Pantene, Revlon, Mobil, Red Lobster, SlimFast, and McDonalds.

His passion and dedication to connecting the audience to master visionaries attracted the attention of one of India’s most acclaimed directors, Prakash Jha, who invited Wayne to bring his Western film scoring sound to the Bollywood market.

Winning India’s top Filmfare award for best score, Wayne’s magic in Gangaajal allowed him to continue his close collaboration with Jha.  In collaborating with the biggest Indian musicians in the world, his work with Sonu Nigam, Shankar and Gulzar on the song ‘Dhan Dhan Dharti’ for Raajneeti won him the coveted Star Screen Award. He created soundtracks for the widely celebrated Apaharan, Raajneeti, And Aarakshan, one of Bollywood’s most beloved films.

Wayne recently revamped the theme for CBS’ Face the Nation and, along with Pearl Jam, contributed music for the feature film Basmati Blues starring Oscar-winning actress Brie Larsen. He also had an Emmy-award nominated run working with SHOWTIME for the sports-themed docu-series’ Against The Tide, All Access: Quest For The Stanley Cup And Running For His Life: The Lawrence Phillips Story.

Class of 2002: Dr. Anna M. Quider is the assistant vice president for federal relations at Northern Illinois University (NIU). She manages NIU’s presence in Washington, D.C. and serves as the primary liaison between NIU and the federal government including the U.S. Congress, White House, and federal agencies. Anna is one of the only scientists to serve as the lead federal representative of a university in the United States. Anna has held positions at the U.S. Department of State and the U.S. House of Representatives where she worked to advance science and education policy.

Prior to her career in policy, Anna was an active researcher in astrophysics. Her expertise is in galaxies from the early universe. She was the lead scientist on a Hubble Space Telescope research project and her scientific publications have received over 700 citations.

Anna holds national leadership roles in higher education and science policy. She is an active mentor for students and early career scientists and has given over one hundred talks at conferences, schools and universities, and other public venues.

Anna holds a Ph.D. in astronomy from the University of Cambridge and a BS in physics and astronomy and a BA with dual majors in religious studies and the history and philosophy of science from the University of Pittsburgh. Her graduate education was supported by the prestigious Marshall Scholarship, considered the 'sister scholarship' to the Rhodes Scholarship.  Anna, husband Brian, and daughter Elaine live in Arlington, Virginia.